Dan Kiley (1912-2004) was one of the most important and influential modernist landscape architects of the 20th century. During his extensive career, he worked with equally significant architects, including Eero Saarinen, Louis Kahn and I.M. Pei, to create internationally acknowledged design icons. This traveling photographic exhibition and retrospective features forty-five vibrant photographs, which chronicle the current state of 27 of Kiley’s more than 1,000 projects worldwide.

This exhibition was co-curated by Charles A. Birnbaum, Amanda Shull, and Nord Wennerstrom of The Cultural Landscape Foundation.

VCUarts Graphic Design students explored history and language, using poster art as the means to convey complex ideas. Sophomore students identified an event or issue in history that was relevant to them as an individual and designed posters that conveyed the significance of each event. The project invited students to explore how history is understood and its context through style and aesthetics.

First-year students in the Design, Visual Communications graduate program display work from their first year. Student work is presented to and critiqued by visiting critic Paul Soulellis, a renowned graphic designer, artist, publisher, and teacher, working in New York City and Providence, RI. His writings and work in the field of experimental publishing and network culture are cited in influential scholarly research. He is the founder of Library of the Printed Web, a physical archive devoted to web-to-print artists’ books, zines, and other printout matter.

The National Mall is a landscape symbol of American Democracy.  It has gone through constant change, often neglect, but the Mall continues to serves us as a freely accessible landscape and a platform to shape political and social change.  This exhibition tells the history of the National Mall, explores its growth and challenges over time, asks us to consider the Mall’s future through innovation design solutions, and explores the past and future roles of the American Institute of Architects in preserving the National Mall.

This exhibition was made possible by the National Mall Coalition.

Way Wza is a multidisciplinary designer and artist who works in photography, painting, sculpture, textiles, book design, artists’ books and performance. Weaving distant cultural ingredients, she gathers esoteric patterns from the structures of her research. In composing these tapestries, what emerges is an itinerant discovery of form and dynamism, inherent and persistent in all complexities of matter regardless of the origination. Inspired by the palm gestures of Buddhism as well as ninja finger weaving exercises (or mudras), the identity for FIST (by Dante Carlos) expresses all the different combinations one can create by raising or retracting a finger.

Hang’s projects have exhibited at the Geffen Contemporary at MOCA in Los Angeles (2013–present), MoMA PS1 (2013–present), Tokyo Art Book Fair (2014) and at NADA with Printed Matter, Inc., in New York (2016). Her work is held in private and public collections, including the Carl A. Kroch Library, RMC at Cornell University (NY) and the Marjorie G. and Carl W. Stern Book Arts & Special Collections Center at the San Francisco Public Library (CA). Hang studied at the Art Institute of San Francisco, California, and currently lives and works in New York City.

This short exhibition is generously made possible by the VCU Graphic Design Department. 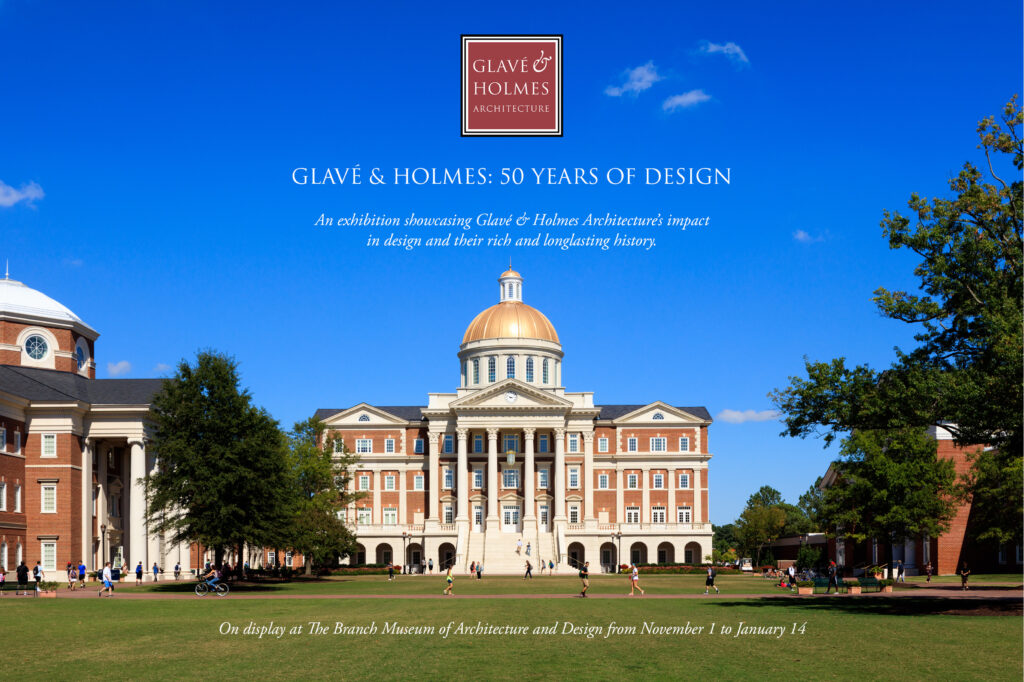 This exhibition celebrated the work accomplished by the many architects who have been part of the firm, the people they’ve worked with, and the spirit and ideals that have inspired the firm for half a century.

Over fifty years ago, two young architects tossed a coin to determine in what order they would place their names on their new letterhead: the firm Glavé Newman Architects was born.

James (Jim) Glavé and William (Bill) C. Newman III were joined four years later by William (Pete) Anderson; the breadth of interest in architecture they each brought to the table came to define a practice – one that was always about more than the individual buildings that came from their hands. Their deep sense of responsibility towards excellence in architecture and design would be influential throughout Virginia, particularly here in Richmond.

This exhibition is second in a series at The Branch Museum highlighting architects who have had long term and sustained influence on architecture throughout Virginia and beyond. The first exhibition was the Carlton Abbott 50 Year Retrospective; the next is AIA Virginia’s 2017 Awards for Excelling in Architecture.